Why are we speaking about harm reduction advocacy in HIV response?

Session Title: Where did our voices go? HIV advocacy in a noisy landscape

Why do we need advocacy for decriminalisation and harm reduction in Eurasia for effective HIV response?

Why are we speaking about harm reduction advocacy in HIV response? Why bother yourself with the issue of drug policy and decriminalisation of drug use and possession?

A simple response is – even the best medicine cannot cure while it is placed in the box in hospital storage. Harm reduction – is the best vehicle connecting people using drugs to testing, treatment and health care. It is the best comprehensive way to provide access to medical help and social support for people using drugs.

I was growing up in University campus area in Kyiv, Ukraine. In 1991, when I reached 15, soviet social systems crashed and violent primitive accumulation of capital (sorry for Marxism) started. University campus became the best scene for open drug trade, accompanied by gangsters’ shootings, corrupted police from the highest level to local cops, easy access to thrown away drugs around. The most surprising story for our peers was not about starting using homemade opiates (sadly, it was quite common), but to quit “the system”. Now I don’t know how many from my class survived alcohol poisoning, drug overdoses or violence. 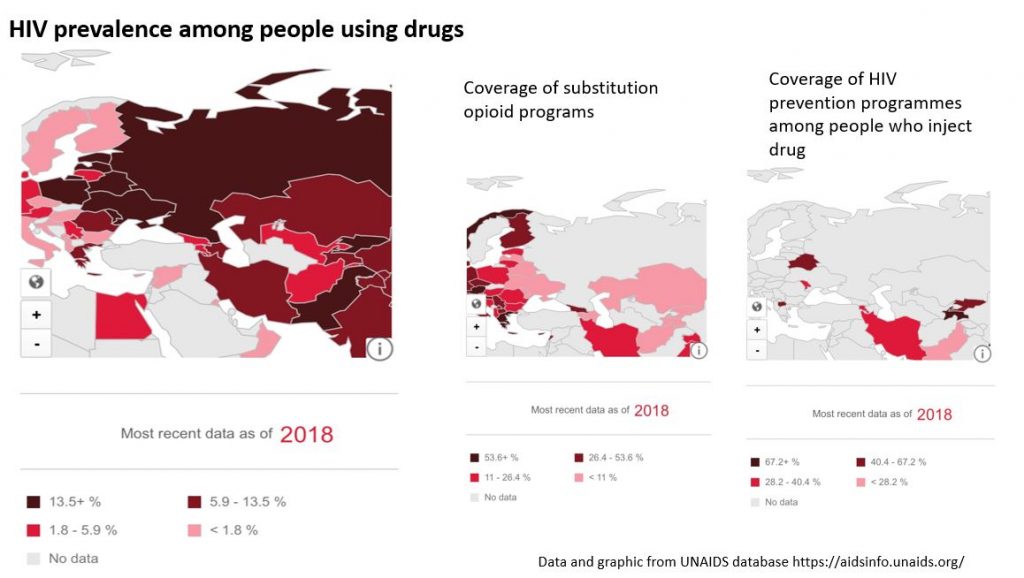 Since 1996, HIV infection has been spreading lightning-fast among people using drugs in post-soviet countries. At the beginning of 2000s, up to 90% of all HIV-positive cases were among injecting drug users. Available ART treatment appeared in Ukraine only in 2004. My neighbours and friends had all chances to be infected through needles but had no chances for prevention, testing or treatment.

Harm reduction for people using drugs came to Eurasian countries along with hope for tremendous changes in health and social care systems inherited from repressive system. In that era of pioneers of harm reduction, every newly opened harm reduction site gave us hope for fast municipal support of it. But changes were not introduced nationwide before the Global Fund to fight AIDS, TB and malaria programs had started since 2004 which lead to tremendous growth in coverage by HIV prevention for people using drugs, and legal recognition of harm reduction in some countries. 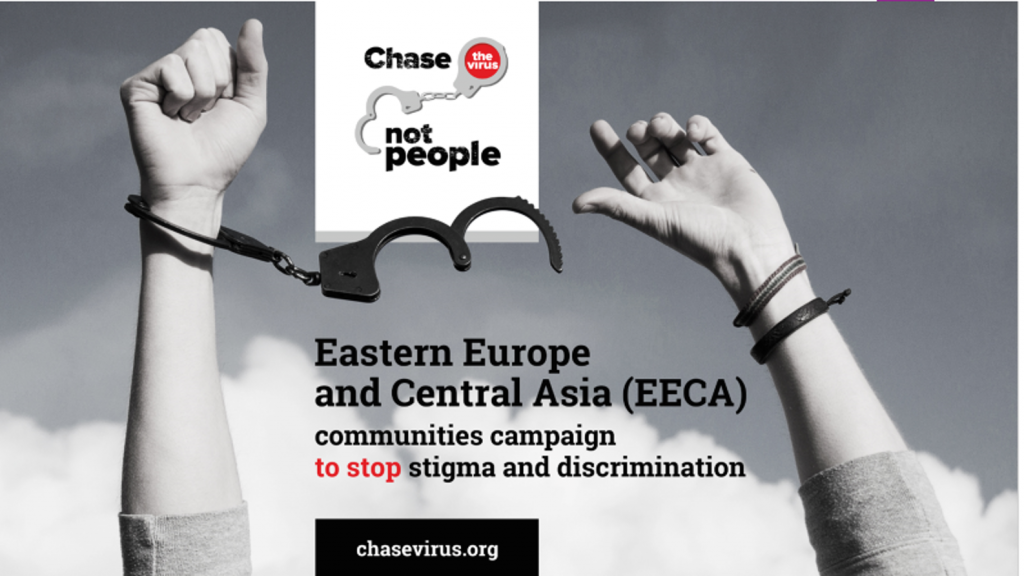 Having all this progress we still see that half of people using drugs living with  HIV are not starting treatment in time and have all chances to die from AIDS, hepatitis C and TB. For everybody in our region it is clear why – drug use is highly criminalised and police are harassing people using drugs.

“War on drug users” – criminalisation of drug use and possession – affects not only lives, opportunities and freedom of people using drugs, but also their access to life-saving information about harm reduction. For example, in Russia and Kazakhstan, all information on non-repressive drug policy, opioid substitution treatment, and preventing overdose, is currently considered a criminal offense as “drug propaganda”.

For all vulnerable communities in Eurasia one slogan is reflecting key barriers for effective HIV response. Nowadays, in times of COVID19 this slogan is even more important. We are saying Chase the virus instead of threatening vulnerable people. Even during crisis, the majority of civil society organisations continue providing harm reduction services to people using drugs, as well as supply them with food and shelters, additional services which are in high demand due to the crisis. 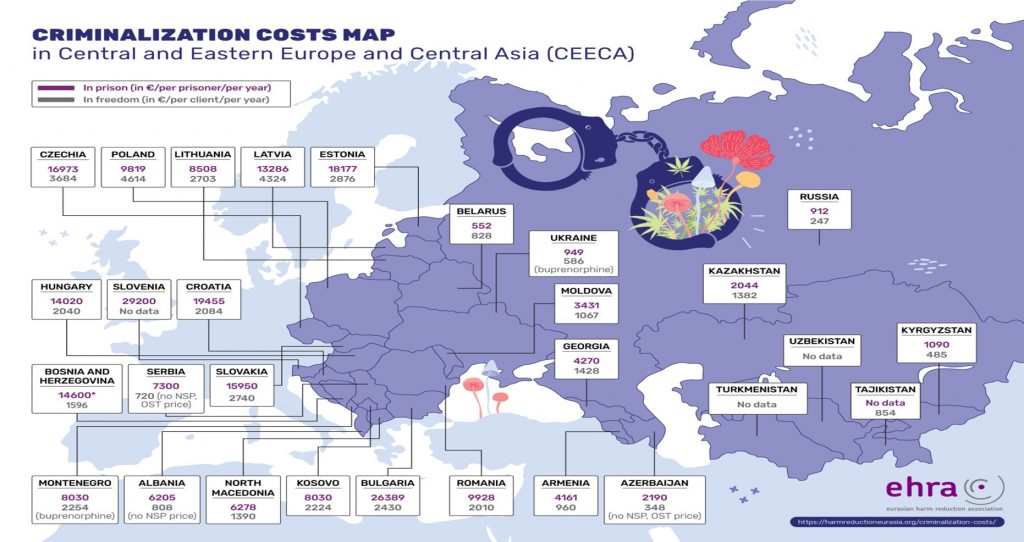 Criminalization of drug use make tremendous impact on the availability of resources to fund harm reduction. To ban and to criminalize marginalized behaviour seems more natural for authorities in post-totalitarian states of my region.

On this map you can see data on how much states spend on keeping people imprisoned in comparison with the cost of social support. Knowing that up to 1/3rd of all inmates are there for drug-related crimes, in reality, for possession of one dosage for personal use. Only one populistic “war on drugs” legislative change in Lithuania in 2017 cost taxpayers up to 25 mln euro. There are costs available in budgets to keep people imprisoned, but no costs to support sufficient coverage by harm reduction services.

Some countries of the region took responsibility for harm reduction. Czech Republic, Estonia, Croatia, Slovenia have incredibly sustainable harm reduction programs with active participation from civil society. There are examples of funding of such programs instead of imprisonment from drug policy budget. Estonia now piloting innovation of police referring people using drugs to peer harm reduction councillors instead of bringing them to court. In a much greater number of countries drugs for opioid substitution treatment are already procured from domestic resources.

In the last two years, several countries of the region not only started procurement of substitution drugs but also introduced domestic support for harm reduction services. Ukraine, Moldova, Georgia, Montenegro, Northern Makedonia, Kazakhstan and Kyrgyzstan – these countries are using GF national and multi-country support to build proper national procurement mechanisms to support prevention and care services provided by NGOs to key affected populations. This gives me hope – there is a chance for effective HIV response among people using drugs.

But at the same time, much more countries rather criminalize vulnerable groups, put into forced rehabilitation or jail. We are hearing alarming signals from Romania, Bulgaria, Bosnia and Herzegovina, Albania, Lithuania, and Russia. Unfortunately, there is less and less pragmatism and humanism in social and drug policies in EECA region, but more and more populism.

Russia influences the HIV epidemiologic picture of the region the most. This country is home to 70% of people living with HIV in the region (which is 1,3 mln of HIV cases).  About 70% of all HIV cases in Russia are associated with the injection of drugs. HIV prevalence is up to 75% among people who inject drugs in some of cities. HIV treatment coverage of people living with HIV in the Russian Federation was about 42% in 2018, but these programs usually are not accessible for people using drugs. OST as harm reduction service is banned in the Russian Federation, and coverage by other HIV prevention for people using drugs is minimal, on the level of several projects. Global Fund has invested more than 250 million USD, but almost all gained is lost now. Russian Government essentially replaces public health approaches with repression and criminalization, creating an atmosphere of intolerance and discrimination against people using drugs, sex workers, LGBT and migrants. Despite Federal Government’s commitment to HIV prevention among key affected populations in the National 2020 HIV Strategy, the majority of provinces fail to support programs for people using drugs or other affected populations, because of the chilling effect of “anti-drug”, “anti-gay”, and “anti-prostitution” laws on HIV prevention activities. Civil society receiving international funding all time under threat of being fined or closing as “foreign agent” 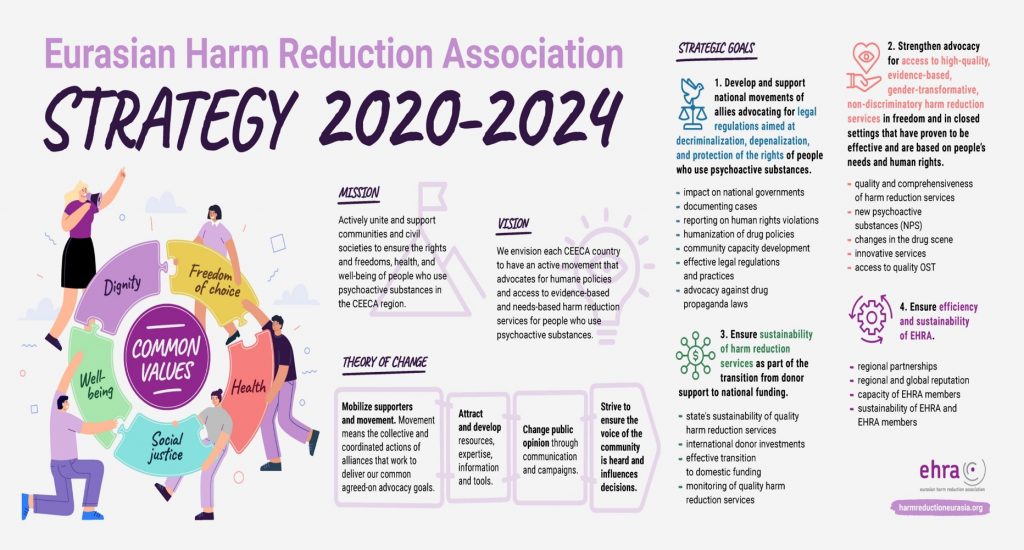 We hear about arrests and troubles for activists in countries every week, documenting and reporting cases of rights violation. Regional networks, such as EHRA, are needed to support local activists and to advocate with governments for funding. But we could not be alone in this. In EHRA’s strategy you see the main step for successful change of the situation – building the movements. Today I invite you, participants of our virtual conference, all HIV-activists to join us in our fight for non-repressive drug policy and access to harm reduction. We can not end AIDS without decriminalisation and quality harm reduction in Eurasia!