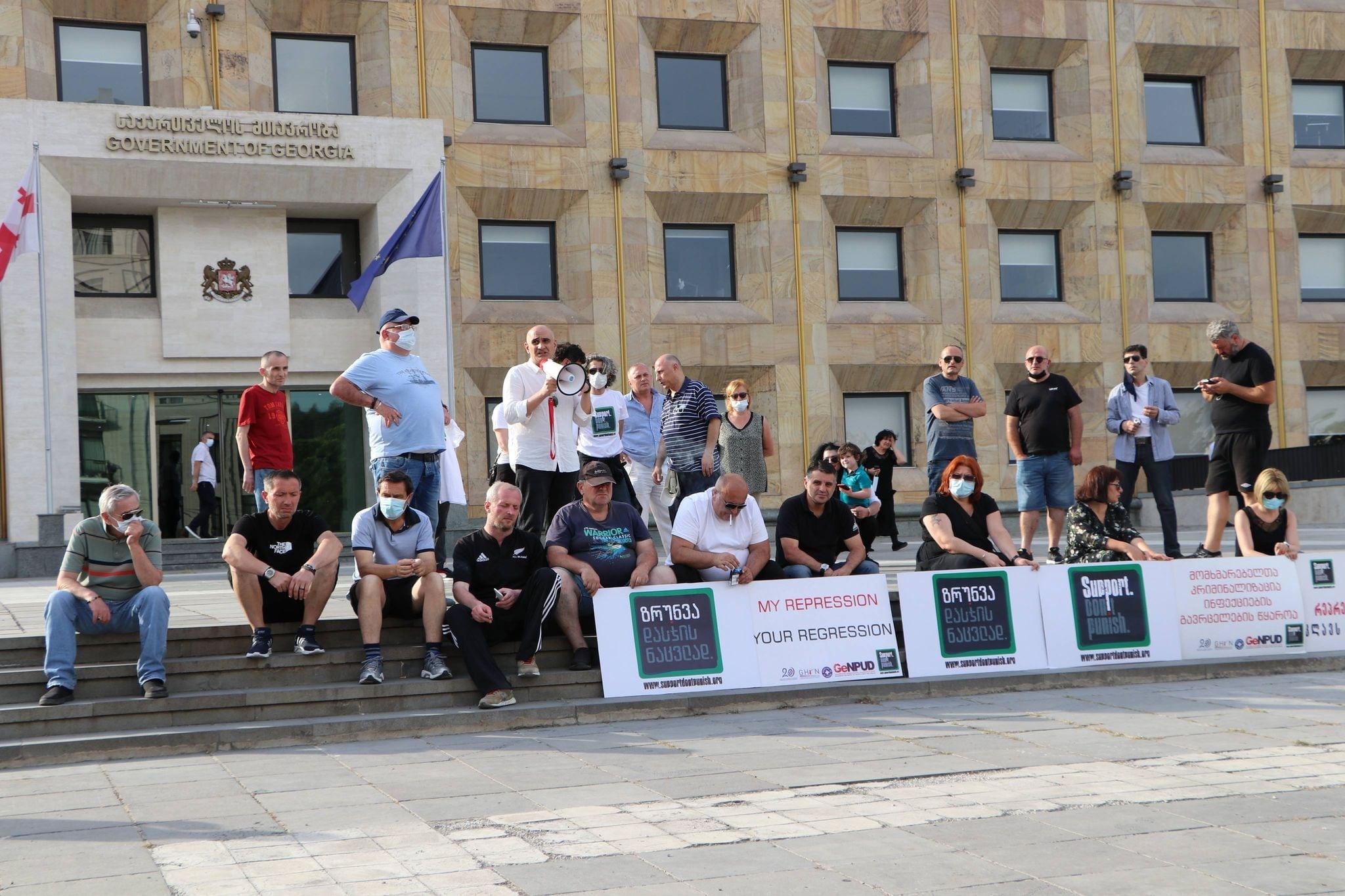 26th June is well known as a global day of action, where activists around the world become part of the “Support. Don’t Punish” campaign, to remind governments to end the “war on drugs” and place health and human rights in the center of drug policy-making processes.

This year is no exception. Community of people who use drugs activists from Belarus, Georgia, Kazakhstan, Kyrgyzstan, Moldova, Russia, Tajikistan, and Uzbekistan joined a global campaign that brought together 260 cities from 96 countries. Local actions were supported by the Eurasian Harm Reduction Association (EHRA) and the Eurasian Network of People who Use Drugs (ENPUD).

Activists who are truly concerned about the current situation with health, dignity and freedom of people who use drugs in EECA region countries marched in their cities, organized flash mobs, shared their fact-based opinions through social networks and media to draw the attention of the general public and decision-makers to start changing harsh government policies towards people who use drugs.

Based on their own stories and experiences, activists showed how the state should express support for people in need. Volunteers bought and packed food boxes, personal hygiene kits, medicines and delivered it to those who need it most, who are treated in hospitals or at home and cannot move around on their own.

The worsening situation with COVID-19 affected the plans in some countries, but it didn’t stop delivering the main message of the campaign – the “war on drugs” is lost, repressions don’t work, it’s time to support, not punish!

ENPUD works to ensure that people don’t become dependent on drugs, and those who get sick stay alive, healthy and free. The living experience in a repressive drug policy environment has taught us a lot about what punishment means.

The value of this year's campaign is that it is open for everyone to participate meaningfully, from concept to its implementation.

Through this campaign, we desire to support community, to give hand of help to people whose lives are affected by economic crisis and by illness and despair, we want to create welcoming meeting and working spaces, we keen to find allies.  This year we decided to support community allies and to award handmade diplomas "Friend of the Community" to two drug treatment doctors from Moldova.

In the framework of the campaign in Belarus, activists from the association “Your Chance” have provided (video) financial support to people who are in acute need of such help. Eight people from Minsk, Gomel, Grodno, Mazyr and Barysau who have difficulty moving due to severe leg diseases and cancer received funds to cover transport expenses to OST clinics. This money should be enough until August this year when the Ministry of Health promises to adopt regulations allowing home delivery of OST.

Actions prepared by the association of organizations of people who use drugs “GeNPUD”, were aimed at changing the current repressive drug policy, which contradicts fundamental human rights and focuses on punishment. Actions were also aimed at changing the outdated rules in OST programs, where take-home OST prescription is not available. With the support of the Georgian Harm Reduction Network and Médecins du Monde, France-Georgia “GeNPUD” prepared a petition to Prime Minister Irakli Garibashvili, and on June 26 they came out to public protest in front of the Georgian State Chancellery in Tbilisi. Outside the capital city in Kutaisi, Ozurgeti and Batumi public protests were organized by “GeNPUD” member organizations – “Rubikon”, “Phoenix 2009” and “Imedi”. Media outlets were invited to the rallies and covered the campaign events.

Other conducted events included a meeting between representatives of “New Vector” and friendly MPs from the “Girchi” party, participation of “GeNPUD” representative in a conference organized by the Center for Mental Health and Drug Abuse Prevention, and release of a short video in which community talks about the problems caused by stigma and discrimination.

People who use drugs activists in Kazakhstan, from Karaganda, Temirtau, Taraz, Ust-Kamenogorsk, Pavlodar, Almaty, Saran and Balkhash, prepared and published 14 short videos and 7 social media posts, drawing the attention of a wide audience of Internet users.  The content included personal stories, interviews with health professionals and representatives of partner organizations, outreach workers, people who use drugs.

For the first time, we decided to roll out our campaign via Instagram reaching diverse audiences, those people who are far from thinking of drug policy issues or about what kind of support is needed. But these people left positive feedback that it's very right that we talk about important things, they thanked people who wrote posts and recorded videos, for courage, honesty, and fortitude.

Coordinator of the Campaign in Kazakhstan

Community activists from Association “Harm Reduction Network” prepared a short video in which people who have suffered from repressive drug policy in Kyrgyzstan and have lost years of their life in prison talk about what “support” means to them and why it is important.

As part of the campaign, volunteers on their own improved the grounds of the Social Hostel “Phoenix” – they built a shelter and assembled two tables and two benches from wooden pallets. The new space will allow organize meetings and trainings for up to 15 people.

To draw public attention to the problem of people who use drugs in Moldova, including young people, community-led organization “PULS Comunitar”, organized an auto rally and street action in front of Balti City Hall. In meeting with drug treatment specialists, community representatives symbolically handed out diplomas “Friends of the Community” for 2 doctors, as a sign of gratitude for the friendly attitude and support to the community of people who use drugs in Moldova. During the meeting further joint actions to broaden possibilities for the community, to expand the geography of OST programs and to access buprenorphine in all OST sites were discussed. Provision of OST through family doctors, pharmacies, and commercial medical facilities was also discussed.

The activities in Russia have primarily involved direct and practical aid to those in difficulty.

In Ekaterinburg, food packages were provided to six people who use drugs livingwith HIV and tuberculosis, who were being treated in a tuberculosis hospital, a woman living with HIV who was in an oncological dispensary with inoperable cancer, and a man who needed help after treatment in a psychiatric hospital.

In Perm, a sanitation service was paid to kill cockroaches and bedbugs in the living place to prevent the mother from losing her parental rights due to poor sanitary living conditions of her small child. Another young mother with an infant and no income was paid for visits to child therapist.

I was threatened that they [a child protection service] would take my child away for unsanitary conditions, but no one ever helped me to kill the cockroaches and put things in order. Thank you to everyone who provides this support, who actually helps people like me. Support, but not punishment, this is what gave me the desire and faith to go on living!

Feedback from a client from Perm

In Togliatti, the organization, recognized as a foreign agent, has no funding, but continues to help clients by providing harm reduction services. Ointments, bandages, disinfectant wipes, antiseptics, soap supplies and diapers for the bed-ridden patients were purchased to continue the work of this organization. During the summer, handouts will be distributed to the city’s most needy people who use drugs.

On 26th June, a mobilization meeting of two community initiative groups – women who use drugs and Global Fund outreach workers was organized in Tashkent. Participants have shared their personal life stories, as almost everyone had suffered from the repressive drug policy.

Unfortunately, many of those invited to the meeting were not able to attend it due to stricter COVID-19 related quarantine measures and travel restrictions in Uzbekistan. Thus one of the “hot” topics of the meeting was compliance with protective measures in the face of the pandemic.