Repressive drug policy in CEECA region causes constant and severe human rights violations of people who use drugs. Every year thousands of people who use drugs go to jail for victimless crimes, they are denied treatment, discriminated by social services, abused by  police, have limited job and educational opportunities. Most of those rights are guranteed by national constitutions and international human rights treaties and states are obliged to ensure and protect them. Currently, there are nine human rights international treaties, and one optional protocol, from which 10 treaty bodies have been established. Most CEECA countries have signed and/or ratified international human rights treaties and most CEECA countries’ constitutions recognize supremacy of these treaties over the country’s national laws. The following treaties might be applied to drug policy issues:

Each of the treaties has at least one of the following monitoring mechanisms:

Cycle of reporting to the Committie within country review procedure:

Ratification Status of the conventions 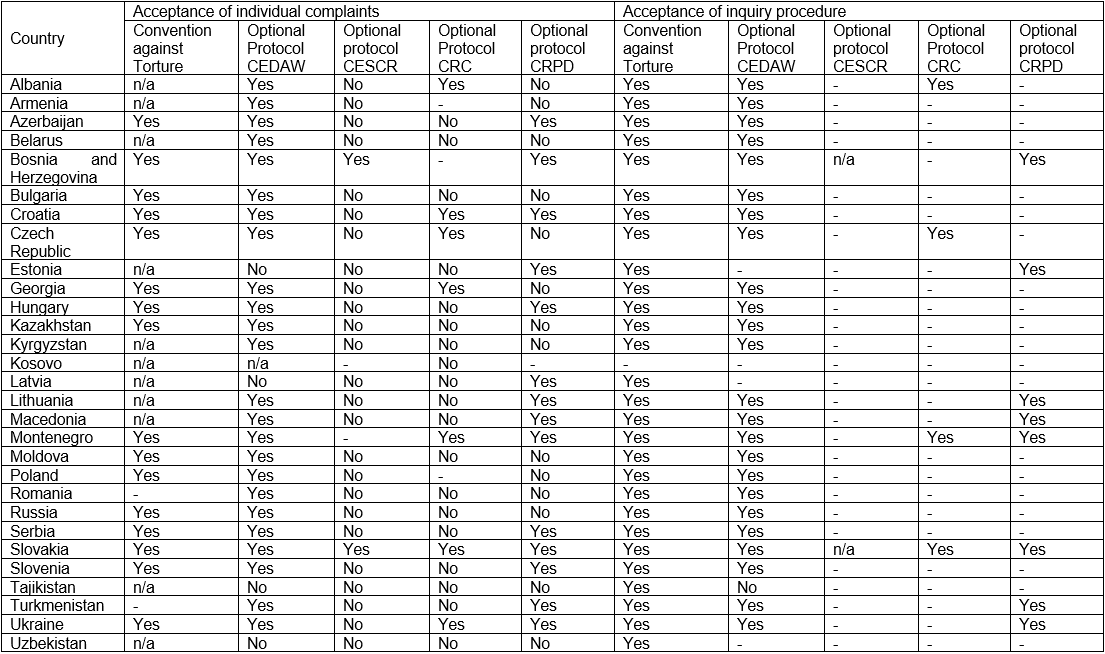 Committee of Ministers the main functions of which are the promotion of political dialogue between the governments of the member countries, the admission of states to the Organization, control over the fulfillment of their obligations, development and adoption of conventions and agreements, approval of the program of activities and budget of the Council of Europe, as well as monitoring their implementation. An important function of the CMCE is to monitor the implementation of decisions of the European Court of Human Rights.

The Committee for the Prevention of Torture, Inhumane and Degrading Treatment and Punishment visits places of detention, police stations and psychiatric hospitals

The Parliamentary Assembly is one of the two main statutory bodies of the Council of Europe and represents the interests of the main political parties that exist in the member states of the Organization. There are 3 Commissions within the Parliamentary Assembly, which deals with human rights: Commission on Legal Affairs and Human Rights, Commission for Equal Opportunities for Women and Men, Monitoring Commission (this commission also monitors the way member states fulfill their commitments made after they joined the Council of Europe).

CEECA countries that are part of the Council of Europe

More information about the treaty bodies and possibilities for civil society to apply to them could be found in the brochure developed by UNDP Know your rights, use your laws

Texts of all of the conventions https://treaties.un.org/Pages/Treaties.aspx?id=4&subid=A&lang=en

People who use drugs of Estonia and Kazakhstan at the 65 session of the CESCR
Criminalization costs in the EECA countries: what repressive drug policy costs for the societies?
Lithuania rings a bell – “Reform of the Psychoactive Substances: Support, don’t Punish” Conference has started in Vilnius
Time to Act! The 4th European Harm Reduction Conference
Handle with Care: How to Document Human Rights Violations among the Most Vulnerable Groups of Key Populations
Criminalization of drugs, health and human rights in the CEECA countries: what is the goal of civil society?
EHRA announces a Drug policy regional consultation
About Drug Policy Reform
LITHUANIA: WHERE ONE SHARED JOINT MAY COST YOU LIBERTY
Webinars on Drug Policy