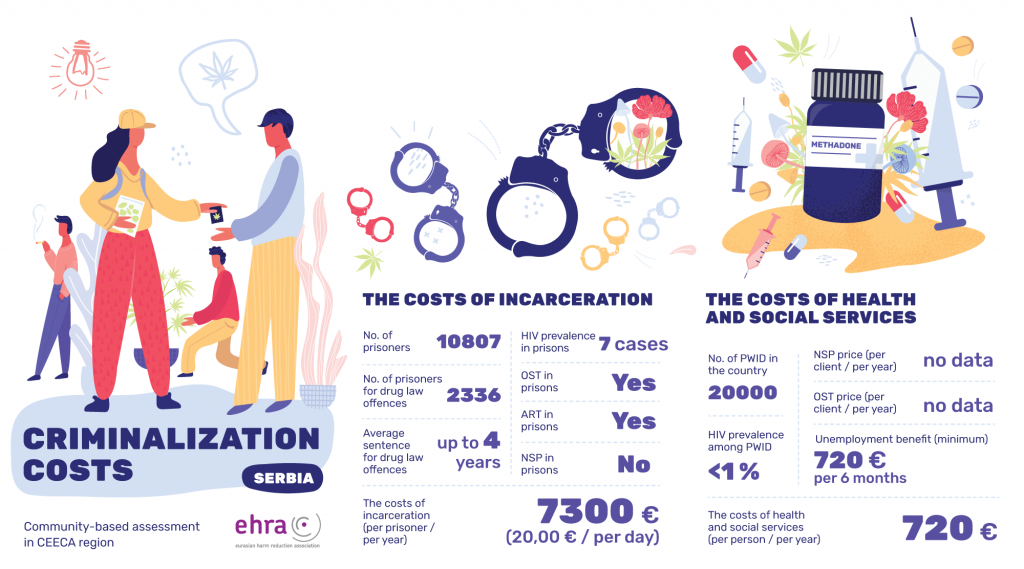 According to the Prison Studies[1], there was approximately 10 807 inmates in Serbia prisons in January 2018. Approximately 2 336 of the prisoner’s population serve their sentence for the drug law offences[2]. The average imprisonment term imposed by the courts for the drug law offences is up to 4 years[3]. Possession for personal use of small quantities is punishable by up to 3 years in prison. According to the Criminal Code, unauthorized selling or offering of narcotic drugs for sale is punishable by 3 to 12 years’ imprisonment. HIV prevalence in Serbia prisons is very low. There were only 7 HIV cases registered in the prisons of Serbia[4]. Speaking about drug use responses in prison, it should be mentioned, that OST exists. As it is stated in the EMCDDA report about Serbia, “methadone maintenance treatment can be administered in prison to opioid users, and the Special Prison Hospital has a mandate to initiate this treatment for inmates. In 2014, 343 drug users and, in 2015, 320 drug users received treatment in the Special Prison Hospital. In 2014, in all prisons in Serbia, 413 people were receiving substitution treatment; in 2015, that number was 487[5]. ART is available and NSP doesn’t exist in prison settings. According to the data, provided by the national partners in Serbia, the average amount spent per day for the detention of one inmate in Serbia prisons is approximately 20,00 Eur/per day, which is 7 300 Eur./ per year/ per inmate.

UNAIDS data 2018 report show, that the estimated number of people who inject drugs in Serbia is ~20 000[6]. Prevalence of HIV among PWID is <1%[7]. There is no data on the price of OST and NSP is Serbia. The minimum unemployment benefit is 120 Eur./ per person/ per month. It can be received only 6 months. Which means, that in total, for 6 months, person can receive 720 Eur. unemployment benefit.

As there is no data on OST and NSP price, the accurate health and social services costs can not be counted and compared with incarceration costs.

Urgent appeal to the UN Special Rapporteurs: the Russian Federation
Report on Russia submitted to the UN Human Rights Committee
Analysis of the proportionality of the imposed fines for drug possession in the Kyrgyz Republic
Legal analysis of human rights violations against women who use drugs in Russia (on the example of St. Petersburg)
Report on the study “Criminalization of drugs and human rights of people who use drugs in the Republic of Moldova”
UN Committee calls Ukraine to decriminalize the possession of drugs
A review of legislative initiatives on the liability of drug-related advocacy (propaganda) in Russia, Ukraine, and Kazakhstan during the second...
“Gathering Data on Human Rights Violations and Reaction Mechanisms”: Regional Workshop for activists and professionals from South East Europe countries
People who use drugs of Estonia and Kazakhstan at the 65 session of the CESCR
Criminalization costs in the EECA countries: what repressive drug policy costs for the societies?
1 2 Next »
Webinars on Drug Policy