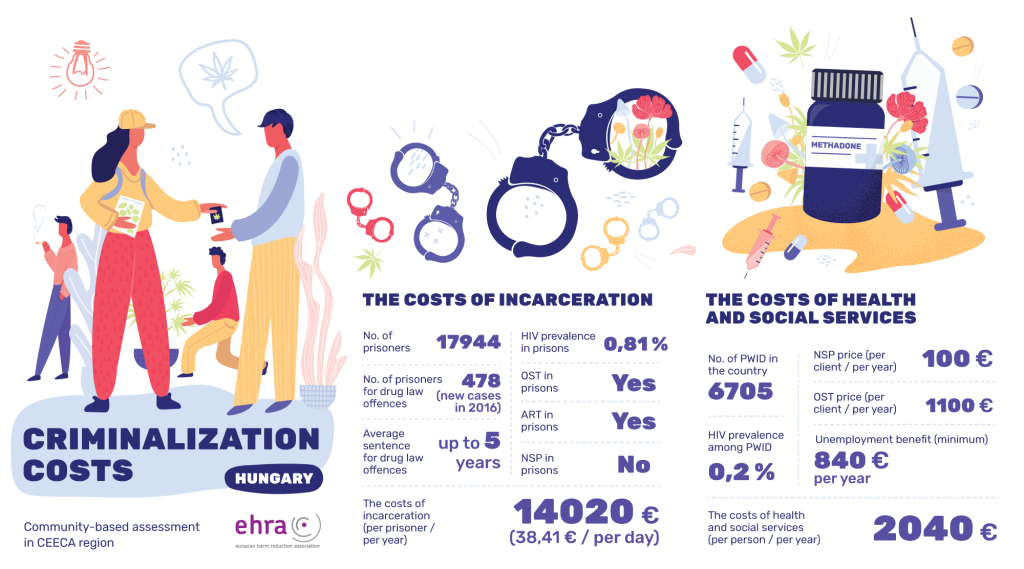 In Hungary both consumption and possession of drugs are criminal offences, punishable by up to two years and up to five years in prison (small amounts) respectively. Penalties for the possession of larger amounts or with aggravation circumstances start from 5 years. According to Prison Studies by September 2018 there were 16947 inmates in Hungarian prisons. Although there is no information on the amount of prisoners serving time for drug-law offenses, according to Hungarian National Focal Point 478 people were sentenced to prison for these type of offences in 2016. HIV prevalence in prison is 0,81%.[1] As for the drug use responses there is ART and OST but no NSP.  Regarding OST it should be mentioned that according to existing regulation (order no. 38/2015. (V.20.)) all detention facilities must ensure methadone treatment as a therapy option for opioid addiction, if the continuation of methadone treatment is indicated by the specialised outpatient treatment centre treating the prisoner before he/she was admitted to the detention facility, or if it is recommended by a specialist at the National Institute for Forensic Observation and Psychiatry and the affected person gives his/her written consent. The treatment must be carried out – in accordance with the respective methodological letter – at such therapeutic sites which are designated for acquiring, storing and using methadone, for which prison institutions are not entitled in the lack of an operating license. For the purpose of methadone treatment the prisoners have to be transported to a specialised outpatient treatment centre or addiction or psychiatric unit which are designated in the region to provide such a service. According to data from the prison institutions in 2017 opioid substitution treatment was available in 1 institution and in 4 institutions it was provided by an external service provider. There were 8 detainees who had been participating in OST (methadone or suboxone) right before being admitted to prison, among them two (in separate institutions) continued the treatment after incarceration. Apart from these no other OST cases were reported by the institutions. In the preceding years OST was provided occasionally by external service providers, if requested by a detention facility, but the number of such cases was exceptionally low. According to the annual data collection carried out among drug treatment centres that provide substitution treatment, between 2005 and 2012, 3 prisoners in 2005 and 2 in 2006 were transported to the regionally competent outpatient drug treatment centre for the purpose of OST. [2] The average amount spent per day for the detention of one inmate in Hungarian prisons is 38,41[3] Eur/per day, 14020 Eur/per year/per inmate.