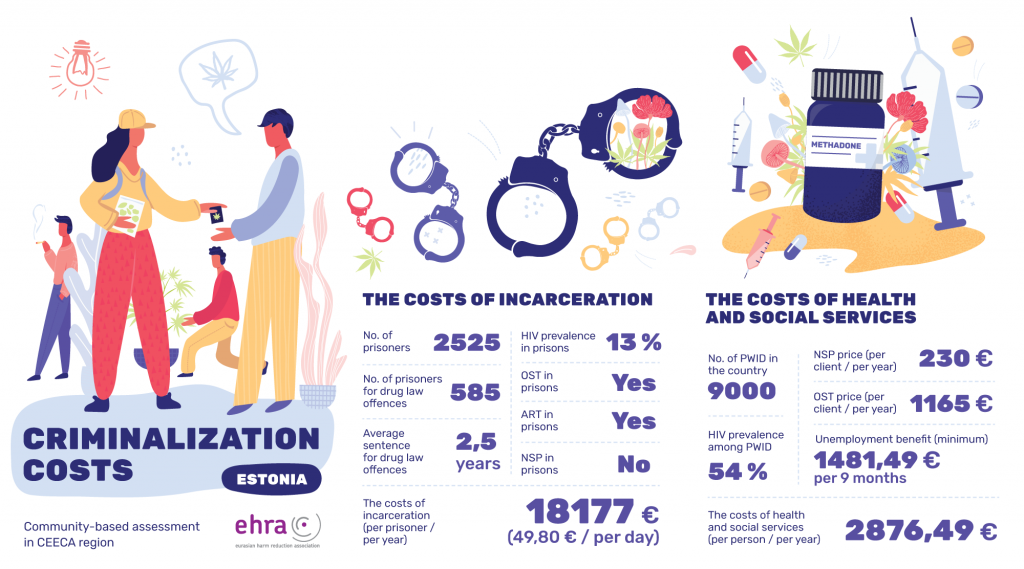 Drug use and possession of a small amount of an illicit drug for personal use in Estonia are not criminal acts, but misdemeanors, for which the punishment is a fine or an arrest of up to 30 days (Act on Narcotic Drugs and Psychotropic Substances and Precursors[1]). Possession of over 10 average doses of an illicit drug (Penal Code §184), or possession of any amount of an illicit drug for the purpose of passing it along to someone else (Penal Code §183) are considered criminal acts[2]. Currently, there are no exact statistics regarding punishments for drug misdemeanors (drug use or possession of up to 10 doses). Almost 90% of the punishments enacted comprise fines, which average to about 100 EUR (about 80 EUR for cannabis, 100–120 for more potent drugs). The law itself does not differentiate between different drugs, but the punishments tend to be lower for cannabis, since more people who get caught with cannabis are first-time offenders. These numbers do not take into account the projects VALIK[3] and SUTIK[4],which have recently started to practice diversion from punishment.

The percentage of arrests for drug-related misdemeanors in 2017 was about 12% (average duration of the arrest in previous years was about 10 days). This number is slightly compounded by the cases where people were arrested for shirking from paying the fines (there is no exact data regarding those cases, but their number is considerably smaller compared to the number of fines issued). For most of the criminal drug-related cases, punishments are issued based on the Penal Code §184. There is no data regarding the length of an average punishment, since many offenders are either punished for committing multiple offences, or their punishment is compounded by previous probationary sentences that are revoked and must be carried out in full after getting convicted. The latest data on court cases was collected and analyzed in 2013 but should reflect the current situation quite closely (as the practice of punishments has not changed since then). Most of the punishments issued are close to the lower limit (a median punishment should be the best indicator. The lower limit for punishments issued for offences that fall under Penal Code §184, Section 1, is 1 year, while the median is 1,5 years; for Penal Code §184, Section 2, the lower limit is 3 years and the median 3,3 years[5].

According to the Council of Europe Annual Penal Statistics – SPACE I 2018[6] in average there were 2525 inmates in Estonian prisons in 2017, 585 of them for drug-law offences. Interesting fact about Estonian criminal justice system is that although there are less than 6% of people with undetermined citizenship (grey passports) among general population, they represent 26% of prison population[7].

HIV prevalence in prisons is around 13%[8]. As for the drug use responses in prison there are ART, OST exists but availability is very low, only in one prison it could be started, in others just continued, NSP doesn’t exist but In 2017, Tartu prison started a small pilot project facilitating that prisoners can have clean syringes and needles on their release. According the SPACE I 2018 survey, the average amount spent per day for the detention of one inmate in Estonian prisons is 49,8 Eur/per day, 18177 eur/per year/per inmate.