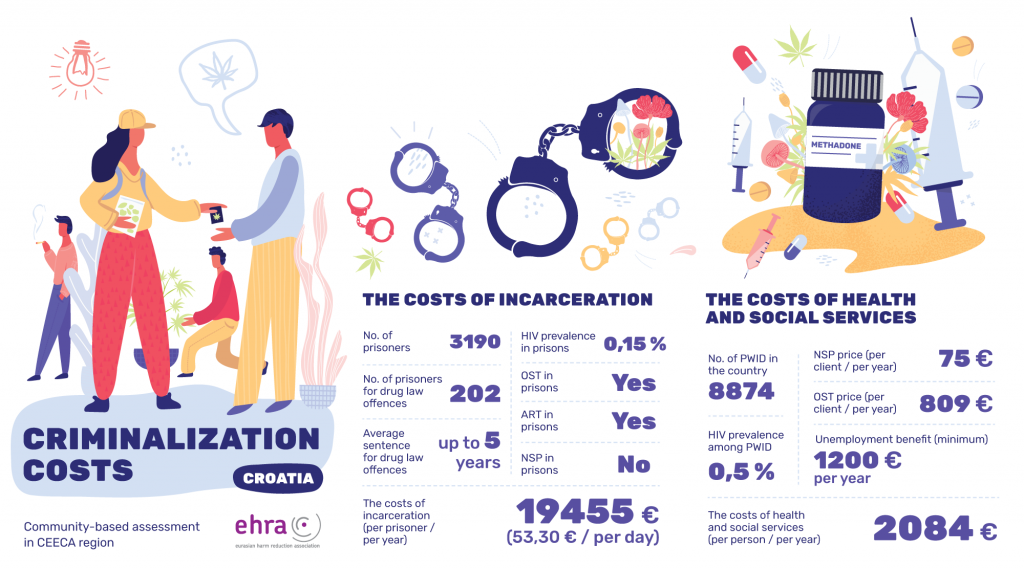 According to the Council of Europe Annual Penal Statistics for 2018[1], Croatia is below European median when we speak about the prison populations among Europe countries. There are 77,70 inmates per 100,000 inhabitants (while European median is 102,5). In January 2018, there was approximately 3 190 inmates in Croatia prisons[2]. Approximately 6% of the prisoner’s population serve their sentence for the drug law offences (202 prisoners in 2017)[3]. The average imprisonment term imposed by the courts for the drug law offences is up to 5 years. Illegal production and processing of drugs with no intention to sell is punishable by six months to five years in prison. Illegal production, processing, possession, import and export with intention to sell are punishable by 1-12 years in prison[4]. HIV prevalence in Croatia prisons is 0,15%[5]. Speaking about drug use responses in prison, it should be mentioned, that OST exists. In 2016, almost one fifth of sentenced prisoners had been diagnosed with a drug dependency, with opioid and polydrug use being the most common issues. Opioid substitution treatment using both methadone and buprenorphine is available in all facilities for detoxification and maintenance[6]. ART is available[7], NSP doesn’t exist in prison settings. According to the SPACE I 2018 survey, the average amount spent per day for the detention of one inmate in Croatia prisons is 53,30 Eur/per day, which is 19 454,50 Eur./ per year/ per inmate.

So, if the person would need OST, NSP and unemployment benefit, it would cost for the state around 2 084,00 Eur./ per person/ per year.

The health and social services costs are more than 9 times less than incarceration costs.