The session on “Connecting NGO and communities representatives from Eastern Europe and Central Asia with 3 Delegations to the Global Fund Board” was held in the The Global Fund Community Zone of the Global Village at the XXII International AIDS Conference (AIDS 2018) on 25 July, 2018. 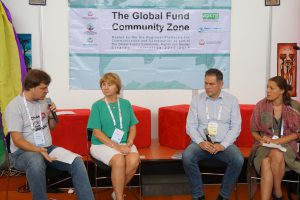 The session was organized by the Eurasian Harm Reduction Association in the framework of the EECA Regional Platform Project focusing on regional communication and coordination. 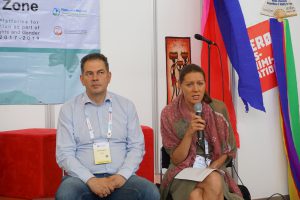 These three Delegations to the Global Fund Board (along with the Developing Countries NGO Delegation ) may be considered the closest allies in advancing the interests of key populations of the EECA region in the agenda of the Global Fund. The session participants spoke about the structure, mechanisms and guiding principles of their Delegations, as well as processes of strategic and political decision-making within the Delegations and the Board itself.

Prior to the next meeting of the Global Fund Board to be held in November this year, the following issues are on the agenda of the Delegations: planned revision of Global Fund allocation mechanisms, evolution of the Country Coordinating Mechanisms, preparation for the next replenishment period and the planned meeting with donor states in this regard, as well as issues related to the transition of countries from Global Fund support to national funding of responses to three diseases and the sustainability of existing programs in this context. 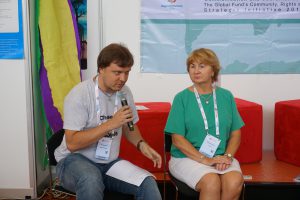 A separate discussion revolved around a possible and desired opportunity for Russia to get a non-voting seat in the donor block of the Global Fund Board. It was suggested that, on the one hand, it might nullify all the chances of civil society in Russia to get funding from the Global Fund in the next allocation period 2019 – 2021 according to the NGO rule. On the other hand,  giving to Russia a seat in the Board may have negative implications for the issues on the agenda of the Board relating to harm reduction, HIV/TB prevention programmes among key affected populations, human rights and others, as Russia may try to block the adoption of positive decisions on relevant issues. It was also noted that the issue of supporting civil society organizations in the Russian Federation in  HIV response remains one the top priorities of the Delegations, as it is impossible to influence the whole situation regarding the epidemic in the region, without undertaking any measures concerning the situation in Russia, which accounted for 80% of new cases of HIV infection in the region. 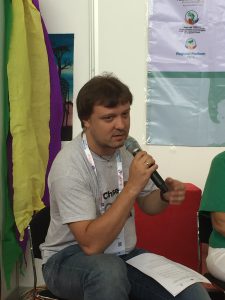 Delegations are open to communication with civil society and communities from the EECA region on these and other issues, because they primarily focus on the interests, concerns and needs of those communities\countries that they represent in the Board, and they need feedback and support to justify their position on the issues brought to the Board’s agenda.

Detailed information about the Delegations and their contacts can be found on their respective web sites:

Communities Delegation to the Global Fund Board

Developing Country NGO Delegation to the Global Fund Board

EECA countries delegation to the Global Fund Board

It is worth noting that Developing Country NGO Delegation is recruiting new members at the moment, new members from the EECA region are especially welcome. Deadline for applications: 20.08.2018. Detailed information can be found here.